Five things I learned in Indonesia 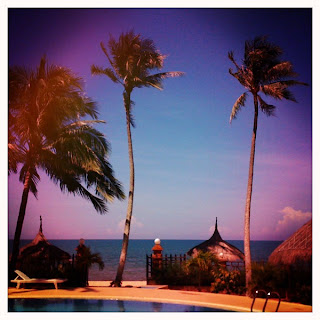 The past few weeks in Vietnam have been very relaxing. After escaping the bustle of Saigon, I breathed in some fresh mountain air in Da Lat. More lazy days followed on the beach in Mui Ne, where I reflected on my time in Indonesia. I wrote reports for PSO, ICCO and KontraS telling them about what I think made my posting successful and which great plans never materialized. All this thinking about my year and a half in Indonesia, made me realize that there are so many things I've learned. Since five is my lucky number, I came up with my my top five! After living in Indonesia, I can (amongst other things):

5. Use dirty toilets. Yes, I have complained about the hygiene at Indonesian toilets before, so I will not do that again here. Instead, I will just applaud myself for being able to deal with the unfreshness (to formulate it nicely). My lady bag (I have had complaints of it being too messy) is always armed with wet and dry tissues. Also, I can squat and hold my breath at the same time now. Hear, hear for that, no?

4. Laugh out loud. In an earlier post, I explained how the roaring laughter of Indonesians (usually occurring in groups) can make my day. Well, I can do it too now! The joke doesn't even have too be that funny, which is a good bridge to number 3 on my list.

3. Make bad jokes. Indonesians are stars in slapstick and obvious jokes. Not to mention repetition. Who cares that the same joke about two single colleagues possibly being a good love match has already been made during every staff meeting in the past six months?! Right, no one. As I enjoy being the center of attention, I also wanted to take part in all this fun. No need to be creative! I just recycled someone else's joke and was sure to be met with a room full of laughter. Wow, I'm sure gonna miss that back home... 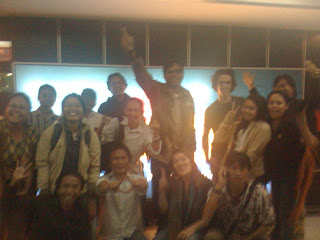 The funny bunch
2. Be late and say it was due to traffic. In the Netherlands, I am usually perfectly on time. That means that for formal things I will be 5 minutes early and for a date with a girlfriend (depending on the timeliness of the friend) be on time or up to 10 minutes late. In Indonesia, everyone is too late. Or (not many people know this) too early. Whether too late or too early, the stress should be on the word 'too' here. People stuck in traffic can be an hour late and text you when they are 30 minutes late to tell you they will be even later. People who were prepared for traffic can on the other hand suddenly be an hour early. Very inconvenient when you planned to clean up your house before they came. Anyway, I can do it too now. Come an hour late, that is. I'll do my hair, dress up and jump in a taxi way too late and then blame ever congested Jakarta for making me arrive so late.

1. Eat spicy food. My mom eats everything with chili sauce. Even hotchpotch (Dutch culinary explosion consisting of mashed potatoes and vegetables, usually eating with a meatball or sausage) is better with a spoonful of sambal. I think living in Indonesia did something with my taste buds as I long for spice all the time. I add red (or when I feel adventurous green) peppers to my Vietnamese noodle soup and will not eat fried rice without spicy sauce. What's worse is that pizza's have lost some flavor. At pizza places in Indonesia you will always get some sauce on the side (French fries come with chili sauce too by the way and you have to ask for ketchup if you want it). If I wouldn't feel ashamed, I would eat them with spicy sauce now as well... 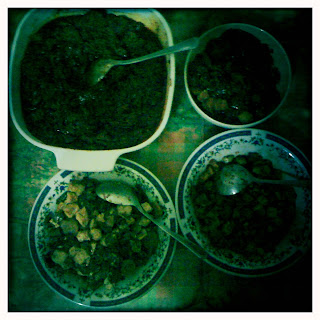