New York was as great as expected! Especially since there was music everywhere! The first night I went to look for it at the Blue Note, a place I couldn't miss. But Sunday I just bumped into different people singing and playing. What a city!


Mariah Carey's hero on the subway


Next backstreet boys?
Posted by Amis Boersma at 9:51 AM No comments:

I'm just excited, that's all... (and yeah, the Karaoke clip will not be used for demo purposes to boost my singing career :P)

This city never ceases to amaze me. One minute streets are jampacked with cars, the next the water is knee-high. Boys jump in and start messing around. They help the bajaj drivers that get stuck by pushing them forward. Great! 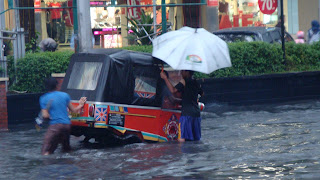 Posted by Amis Boersma at 9:41 PM No comments:

As I have been blogging for Amnesty in Dutch, I have somewhat neglected this blog. This time I'll talk about some weird things that caught my eye here. Still in Bangkok, I noticed how all the schoolgirls in their uniforms wear belts. The skirts they wear (and pull up, to make them as short as possible) however do not have straps for the belts. How do they solve the problem of their belts moving up and down? Right, by attaching it with a big paperclip - you know, the ones you uses to bundle a big stack of documents... First, I thought it was just one girl being creative, but in fact its a movement! Being very quick one morning, I took a picture of this girl at the breakfast buffet. 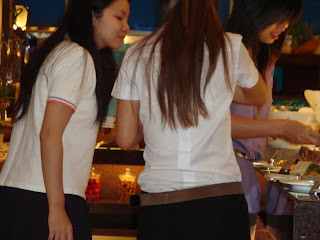 And then two pictures taken at a Java Jazz Hotdog stand - Indonesians do it better, or at least bigger :P 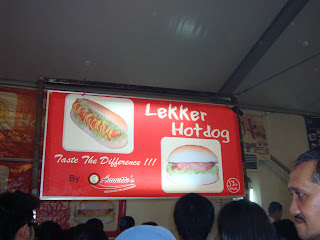 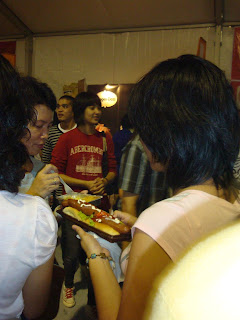 Posted by Amis Boersma at 9:29 PM No comments:

Today I learned that everything Korean is hot in Thailand; Korean food (kimchi mmm), funky clothes (and nice hairdo's) and of course, Korean music is the bomb here. This was nicely illustrated when we stumbled upon a crowd of screaming Thai girls this afternoon. Apparently Korean boyband Super Junior was performing, heavily sponsored by a Thai brand for talc powder. The skytrain station was packed as was the big square in front of Siam Paragon mall.

While we were having dinner nearby, girls came running past - yelling, with their camera's ready. Since I hardly ever see Thai running (a sign at the skytrain entrance actually tells you not to run for the train), it was quite an experience.

This song below has been haunting me everywhere. And guess what? It's Korean too!


Wonder girls
Posted by Amis Boersma at 7:31 AM No comments:

After another ten hour trip with little entertainment from KLM (I'm still reading 'What's the what' and spent my time writing, sleeping and listening to music), I arrived in Bangkok. Nothing changed. The streets are full of cars, the heat is all encompassing and the food smells amazing as ever. Must say that my hotel room is very nice - hopefully it will enable me to perform optimally during my three-day visit here. My view: 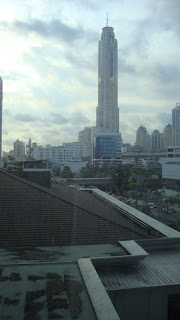 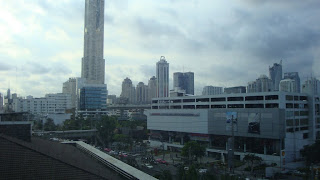 Posted by Amis Boersma at 10:38 PM No comments: