Two weeks a go I was lucky enough to be able to visit Tana Toraja on Sulawesi after a week of hard work in Makassar. On day two we got up at 5.30 to get a glimpse of the sunrise at Batutumonga. It had rained all night and it was foggy in the valley. Just when I was about to give up and go back to bed, the sun broke through the clouds. After a a breathtaking panoramic view overlooking the seemingly endless valley with sawas and traditional toraja houses, we went on our way for a walk. 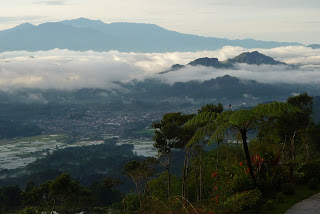 View at Batutumonga
After about twenty minutes a man approached us on his motorbike. Cutting straight to the chase, he told us his father had passed away three days earlier and according to Toraja tradition they had made him sit. Yes, you read that right: they made the dead man sit! Then, he asked us if we wanted to come to his house (he points to a traditional Toraja house on a hill) to see his dead father. After getting past some initial shock, we agreed and went on our way. The man directed us to an overgrown path behind a few slippery rocks and said we would meet him again at his house. While climbing unsteadily up, I wondered why I was actually doing this. Arriving at the house, where people were praying and singing, made me want to turn around and leave. Soon enough however we were greeted by one of the dead man's daughters who seemed to be absolutely delighted to see us. She brought us tea and a local delicacy of rice and red sugar and told us all about her father. He was in his nineties when he passed away and spent his life working as a local tour guide. He spoke fluent English, Dutch and German.
And then it was time for the moment I had started to dread: meeting the man. I considered backing out, but realized that this may be once-in-a-lifetime opportunity. So up the stairs we went. And there he sat. A man. Dead. He was wearing traditional Torajan clothing, sunglasses and band around his face to keep his cheeks together. His hands were neatly folded. As the family has used Formalin to preserve the body, he looked very good. Also, it didn't smell bad at all. Still, it was weird. Very weird. The daughter (a woman in her fifties) urged us to sit down and started telling us how much her father would have enjoyed meeting us, were he still alive. She told us about her daughter who lives in Holland now and how cold she was when she visited her last year. She went into all sorts of details of her daughters wedding to a Dutch man, where they met, where they live now and more. In the meantime, we were still sitting in front of her deceased father. There were kids playing there - one was secretively taken pictures of us with a cellphone. Nobody seemed to mind there was a dead person in the room, except for us, that is. 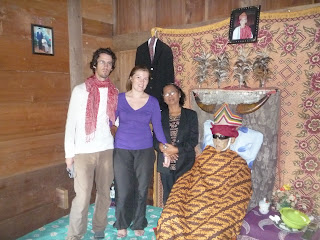 Feeling rather uncomfortable as you can see
The family wanted us to stay around for another day so we could witness the ceremony the day after. Unfortunately, we had a plane to catch. After wishing 'opa' (as I decided to call him) a peaceful afterlife and saying goodbye to all the very sweet relatives, we continued our walk towards Rantepau. We couldn't stop talking about it for a few days and told everyone we met afterwards. The funny thing is that this experience made me less scared of death. I used to avoid looking into the coffin at funerals afraid to see what death looks like. Now, I realize that it may help the mourning process if you can be around the familiar body for a while longer. But when it is an unfamiliar body, it's slightly different. Even though I wouldn't have wanted to miss this experience, I think I would have preferred meeting opa while he was still alive...
Posted by Amis Boersma at 8:31 AM

Hoi Aam, wauw, wat een gebeurtenis. How odd and peculiar. Maar het geeft inderdaad te denken hoe krampachtig funerals hier in Nederland zijn and how organized. Why did they invite you is the first question that you would like to have answered. Mooi verhaal.