Indonesia, Indonesia - Fogged out of the office 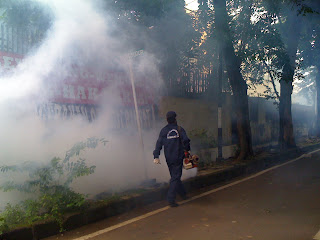 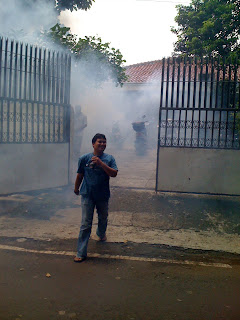 Where in the world do your colleagues run into your office saying: "Come outside now, they're coming to fog the office!" and then you grab your phone, you stand outside the office with everyone else, some guys in blue overalls come in with big smoke guns spreading out some deadly fog, only to walk out followed by cockroaches running for their lives (most of them in vain though)? Right, Indonesia. The area where I work was cleared of dengue mosquitos last week, or at least that's the idea. I hope it worked, cause I would not like to fall ill like my friend Egbert.

The fogging was quite an experience, especially since it took at least an hour before it was deemed 'safe' to move back in. Completely unprepared as I was, I hung around and chatted with the other 'evacuees'. They did not however seemed to be bothered as much as me by the smoke residues floating around. It smelled like Baygon all day and that can never be good for your health! Well, obviously someone made the decision that inhaling some toxic smoke would beat getting dengue, which I guess makes sense. While we were all standing outside though, with roaches running towards us, I wondered if there's no other way of beating the mosquitos. Or was this just an attempt to distract a bunch of human rights activists?

Anyway, at least many roaches died of suffocation that day. Also, when, one day later, I was surprised at being bitten by a very much alive mosquito, someone said: 'No, but the fogging only kills the dengue mosquitos'. Say what?! Can someone explain that to me please?
Posted by Amis Boersma at 5:54 PM

great story! hahah the roaches and you leaving the building, my god...

Kisses, Putih -who used whitening cream to much, that's why she's called this way, :-)

Seems pretty hardcore indeed! At least they're not sending the army for that yet...