Ignite Jakarta - Enlighten Us, But Make it Quick

On March 4th the first Ignite Jakarta event was organized. This event started as a small scale initiative in Seattle and grew out into a worldwide event within a couple of years. The initiator of the event in Jakarta, Ramya Prajna, felt that Indonesia should also be represented during Global Ignite Week, when in more than 70 cities worldwide this event would be organized. It was a good call, because it was a great success. Especially nice for me was that Ramya allowed me to be one of the twenty Ignite presenters. All of us got 5 minutes and 20 slides (which automatically moved to the next after 15 seconds) to tell a story. The line up was really good. It consisted of famous Indonesians (the rapper Pandji, the comedian Iwel Wel for instance) and less known Indonesians, who gave smashing talks. They spoke of online communities, photography (Taking one photo each day, iPhoneography), the importance of numbers and measuring and about how to think outside the box, but execute within the box. My nephew Petho shared a great story about how he gained weight by eating the right food and working out in order to increase his self-esteem. 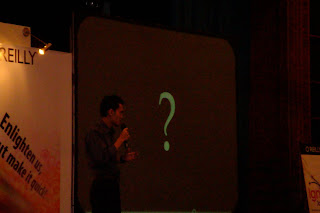 And then there was one half-Indonesian, half-Dutchie. My story was about 'time' in Indonesia. About how people do not look ahead and live in the moment more. And about how that is sometimes great. And sometimes not so great. The topic kept on growing in scope, far beyond what 5 minutes can hold. After philosophical debates with several family members I decided to narrow down the subject. I basically just talked about how my life here involves a lot less stress than my life in the Netherlands used to. My main point: Let Indonesian not also fall into the stress trap, but let them be effective in a more relaxed way. In order to do that you need the best of both worlds... Seen from the audience's response, my talk was a success and I have to say. I really enjoyed myself on stage! Soon the talk will be online, including English subtitles. 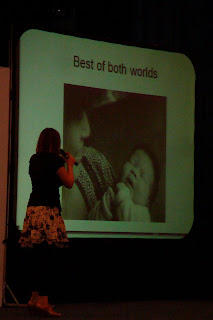 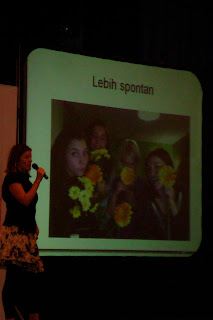 You can read more (in Indonesian) here and (in English) here.
Posted by Amis Boersma at 8:10 AM