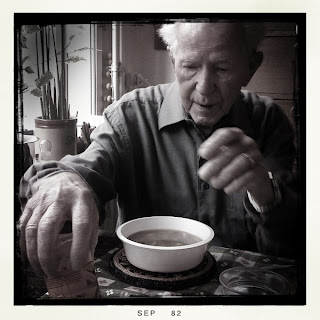 Meet my granddad, Tjibbe. He served for four years in Indonesia from in the forties. Yes, during this time the Dutch colonial government violently tried to hold on to its colony. Recently (sparked by photos of mass executions), discussions arose again about the amount of violence used by the Dutch. There is quite some re-writing of history be done.


However, my grandfather speaks only with a happy spark in his eyes about the time he spent in the Dutch Indies (the Dutch still considered Indonesia as the Dutch Indies until 1949). He signed up voluntarily and even falsified his father's autograph in order to be able to go. He loved the climate, the people, and the food. These days his health does not allow him to eat anything spicy, but there is no way the doctors (or my grandma, for that matter) can make him stop eating sambal (Indonesian hot chilly sauce).