Please feel free to rip me off

The joys of being a tourist

I love to travel. That much has been established. What I don't like is to be the tourist. Tourists are easy targets and (often rightfully so) played for fools by the locals. Since we look like wallets with shoes on, you can't blame those working in the tourist industry, I guess. I just really do not like the feeling of getting an unfair deal. In Indonesia, I often played my 'I'm almost local' card and sometimes that would help in negotiating the price.

In every country or region the sellers would have different tactics for getting you to buy their goods. Somehow the phrase 'Kijken, kijken, niet kopen" (meaning "You look and look, but you don't buy anything" in Dutch) made its way all over the Indonesian Archipelago. This actually leads to me not wanting to buy anything at all. All over Asia, I have found that repetition seems to be a much used strategy. A guy would yell "transport?" from across the street, you walk passed and another guy yells the same thing. This can go on for a while like that. Do they really think we'll pick guy number six? 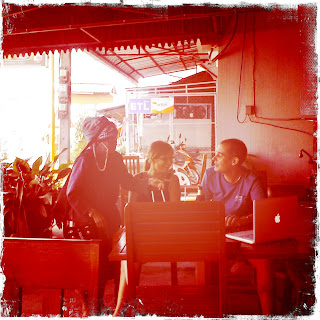 A woman of an ethnic minority in Laos tries to sell bracelets
and ends up Skyping with people in France
In Vietnam they are really quite sneaky. I'd already been warned by several people, so I was ready to fight so I wouldn't be ripped off. Several times the menu would not have prices and the bill would be remarkably high. Or the waiters would put stuff on your table that you'd have to pay for without telling you (such as fried things to eat with your noodle soup or wet napkins).

A few times were actually quite memorable. The first was on a cruise in Halong bay, Unesco world heritage site. While admiring nature in silence, I noticed a little boat approaching us. The woman saw me looking and yelled "Hello?! You buy something?". Goodbye peace and quiet.

Some salespeople seemed to have read books on marketing. On the street in Hoi An, a woman tried the reciprocity approach. I could take a picture for free (she basically attacked me with her gear), and buy a banana in exchange (which I didn't do): "You photo? No money! I am 74, very poor. You buy banana?" 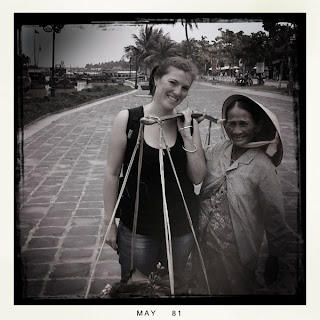 Creative banana selller
Just speaking to a sense of guilt and social proof can also do the trick. At a salon after getting a massage, the masseuse told me: "Please write how you like massage. You give me tip? No salary. My salary your tip." She'd been smart enough to write down in her little booklet that previous customers had paid the amount of five dollar, leading me to pay, yes, five dollars too. Even though I don't like getting an unfair deal, I'm also always the softie that ends up giving high tips. But hey, let's see things in perspective; how much is five dollars in Amsterdam?
Posted by Amis Boersma at 5:25 AM