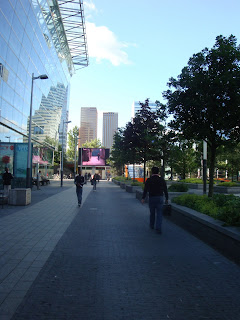 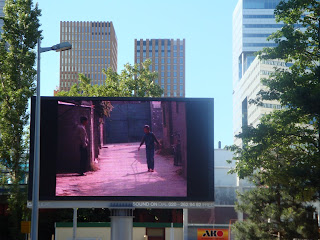 On my way to a meeting at the airport, I rushed my way through the commuter crowd when my eyes caught a girl jumping ropes. She was shown on a huge video screen in front of the train station, right in the heart of Amsterdam's business centre. A man next to her, jumps along. It was a surprise to see, a sudden bit of peacefulness flowing across the square. I stood still and tried to understand what it was I actually saw. 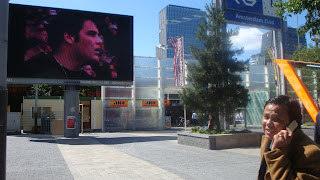 On the way back, I showed my (very special Burmese) guest the screen and we found out that through a toll-free phonenumber we could hear the sounds that accompanied the images. This time the controlled passion of football fans was shown.
This open air art is provided for by CASZUIDAS – moving images in public space, a what they call "urban screen arts initiative". It's great! Very inspiring. It does make me wonder however whether more people actually take to time to watch it. Has anyone else ever called the phonenumber to get the soundbites?
Posted by Amis Boersma at 2:21 PM