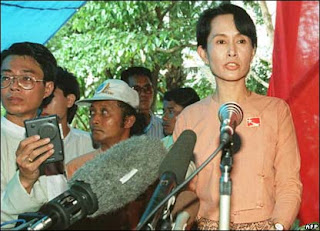 Approximately, two weeks now, she has been imprisoned in the notorious Insein Prison in Yangon, Burma - Aung San Suu Kyi, the leader of Burma's opposition party, the National League for Democracy (NLD). After being under house arrest for thirteen years, she was scheduled for release this week. However, a mysterious American man swam across the lake surrounding her house and spent the night there. After arresting the man when he tried to swim back the next day, the Burmese junta immediately used this incident as an excuse to lock Aung San Suu Kyi up in prison. Her trial is ongoing now.

In 2010 elections are scheduled, which the junta calls its first steps on the road to democracy. Having the leader of the NLD imprisoned is all too convenient for the military leadership. Through Burmese media in exile both Burmese in and outside their country as well as foreigners all over the world, have access to news from Burma. For more news, visit the Democratic Voice of Burma, Mizzima and Irrawaddy websites. 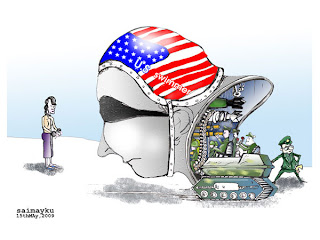