In the movie Limitless (not bad by the way) it is assumed that we only use 20% of our brain capacity. That we don't use a lot of it, became obvious to me again last Saturday at Albert Heyn (a Dutch supermarket chain). People often act like computers in sleep mode than as highly intelligent creatures!
Upon arrival at the store I noticed there was an extraordinarily long queue at the ATM near the entrance. In order to pass it, you almost bumped into a sign saying that you could only pay by cash. Maybe some hackers had managed to bring the electronic payment systems down - it was down in all Albert Heyn stores in the country. While I was getting my groceries they announced on the intercom as well that we could only pay by cash. I was impressed by how well they were informing the customers. 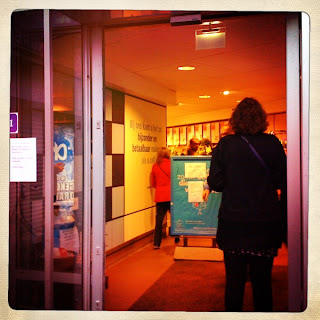 But yes, you can of course guess what's coming next... While in line to pay, there were at least five people that seemed to wake up from a long nap and were annoyed at the cashier that they could not pay by card ("This is ridiculous. I don't have any money on me!"). They aggressively put their groceries back into their basket and made their way to the ATM queue.
It could've happened to me too. And probably to you too. So, why is that? Are we robots that do not think when we do things that we often do? Do we stop observing if we know the environment? How come people were so lost in their thoughts that they missed the ATM queue, the signs AND the announcements? How come there aren't many more bicycle accidents in Amsterdam knowing people are absentminded?
Well, now I understand why all this talk about mindfulness and 'the power of NOW' is really necessary. In Jakarta, I'd often take a different route to work just to give my brain some different impulses. On my other blog, I once wrote about things you can do to get yourself out if you're stuck in a rut. So, what are you gonna do to get yourself out of robot mode?
Posted by Amis Boersma at 1:14 PM