The third edition of the Fifteen Minutes of Fame weekend (last year renamed Matchbox weekend, but now back to its original name) was a great success, just like its two predecessors. We went to the same bungalow park (appropriately named Carpe Diem) as last year, since I had to book everything while traveling in Asia only three months before the event - which for Dutch standards is ridiculously late... 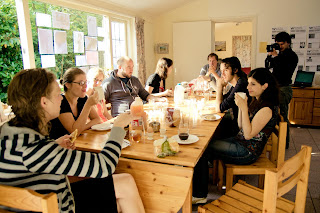 Having breakfast surrounded by paparazzi
We had again twelve presentations covering a wide range of issues - from photography to personal development, from looking the lessons life presents us with to discussing what we eat and buy. As always, each fifteen minute presentation brought a unique insight or inspiration to do things we had wanted to do for a long time. Since the weather was great, we changed the program to be able to get some sun on the beach. The presentations were thus quite spread out over two days which made it easy to focus and gave time to reflect.

So what were the presentations about?

Maike did a presentation on association. Using postcards as her modern-day powerpoint, she urged us to get more into right brain activities. She reminded me of the power of association and of the freedom it brings to just fantasize away. We hardly ever allow ourselves to associate freely and take the sometimes random connections our brain makes seriously. Very refreshing. 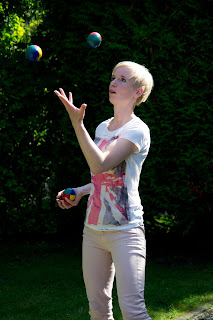 Maike stimulating creativity
Beatriz asked us for input for her research proposal combining sociology with urban planning. We discussed some issues on the border of these two disciplines, such as safety or the extent to which different ethnic groups interact in Amsterdam. Which cities or areas could be comparable and which topics would be interesting enough to study?

Emma made an exhibition with to do lists and photos of tasks which she felt needed to be done - before and after they actually were. As I keep lots of to do lists, the topic spoke to me. It made me see that just doing things straight away works better than keeping it on to do lists for a long time. A lot of the pressure is built up in our own brain. Another eyeopener: the list is never done. Every time we complete a task, we will have come up with a new one. Give yourself a break! (You too, Emma!)

Fenneke reminded me of the fact that we can be in touch with nature if we want to be. On the map of Amsterdam she showed us the places where she goes to pick berries and apples. I was surprised to hear there were actually places like this in my city and realized that I don't see the city's plants as a source for food. Also, I seem to trust the supermarket more than a tree to provide me with healthy berries. Strange isn't it? 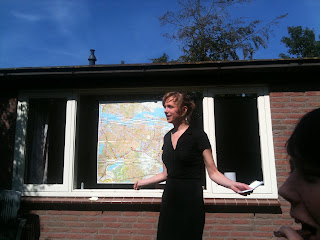 Fenneke points us to the city's treasures
Luis makes a great photography magazine, which is read by thousands of people. To me, his presentation was truly a wake up call. Things will only happen, if we make them happen. We do not have to be experts in something in order to have an opinion. Again, just DO it. Also, his persistence NOT to ask for money, or make money with advertising, is just amazing - he wants a 'pure' product, solely fueled by passion, nothing else. Check out DOF magazine and sign up!

Philippe did a consumer test on us as a group. We all tasted four different types of beer, cola and crisps and had to say which ones we liked best. Also, we had to match the right brands with the products tasted. I am very much a Coca Cola preacher (I really do not like pepsi) and was very happy when I recognized it - as did everyone else. Besides that, it was a good reminder of the fact that the more expensive products are not necessarily the best. 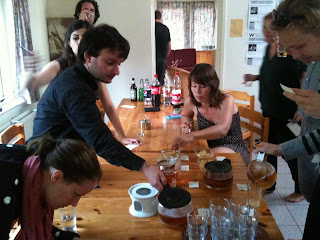 Serious tasting
Victor shared the life lessons that he learns by doing improvisation theatre. The one that rang most with me, was 'be confident'. He said that when he plays a scene, he forces himself to fully go for it. Despite any insecurities you may have, it matters that you do it. After his presentation, he did some improv exercise with us. It was cool to see how quickly a funny sketch can evolve.

Miriam talked about the Happiness project, a very popular initiative started by New Yorker Gretchin Rubin who works to improve different aspects of her life to end up happier and shares her steps online. Miriam gave us all a little handwritten notebook with the main points. What stuck with me is to have concrete goals and to do something every day. More on that soon!

Tommy spoke about personal development, overcoming fear and fighting limiting beliefs. We all spend too much time telling ourselves we are not good at things (such as singing, dancing, doing our finances), just because we are afraid or too lazy to start improving our skills. We should be aware of the reasons why we tell ourselves these things and find solutions to overcome them.

Erik talked about the fantastic Dutch TV show 'Keuringsdienst van Waarde' and reminded us of the fact that we need to aware of the products we buy: "After going out, when I'm already drunk, I really want to eat something greasy. I see the chicken at the snackbar, it's calling my name. But I won't eat it". It was good to again think about the choices I myself make when I shop. How much more am I willing to pay for an ecological fair trade product?

Matteo gave us some tips for making better pictures. One I liked was to think about the light. I mostly focus on the composition and forget about the importance of light. Matteo warned for taking pictures around noon and advised to instead do it in the golden hour, right after sunrise or just before sundown.

The last presentation was mine. I confessed that I am a latte snob. Yes, I am one of those women that spend too much money on a daily dose of coffee drowned in milk. I enjoyed talking about it (supported by this) and realized along the way that I would really like to work in the realm of coffee. To be continued...

Miriam made frontpages of the 'Wall of fame journal' for everyone, which were written on during the weekend. 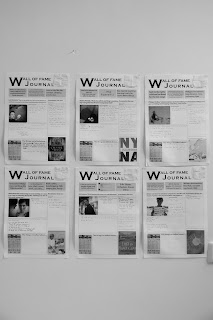 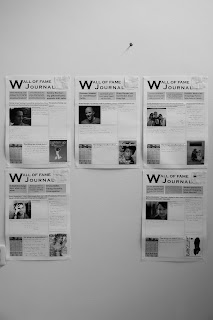 Others blogged way faster than me. Check out what Victor wrote beforehand (in Dutch) and Miriam and Tommy afterwards. Want to know more? Go here or leave a comment to already sign up for next year's edition!