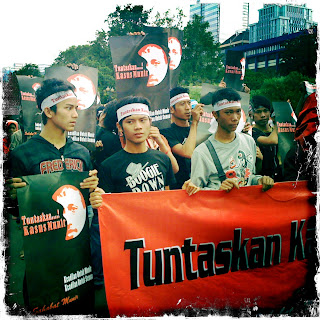 Last week Tuesday, it was six years since Munir was murdered. Munir was an Indonesian human rights activist who was a strong advocate for victims of grave human rights violations in Indonesia. He set up several human rights organisations, one of which is KontraS.

On 7 September 2004, he went on his way to study in the Netherlands, but on his trip he was poisoned with arsenic. When his plane landed in Amsterdam, Munir already passed away. For six years now his wife, former colleagues and friends have been pushing for justice. Even though the Garuda pilot who gave Munir the poisonous drink, Pollycarpus, is behind bars, the people who planned the murder still walk freely. After the case against the suspected mastermind Muchdi was acquitted due to lack of evidence in december 2008, not much has happened. Last week some 500 people demonstrated in front of the presidential palace to demand justice. Munir, you will not be forgotten! 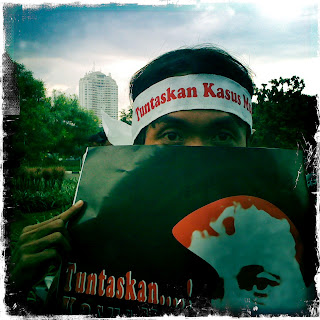