How the gecko fights the crocodile 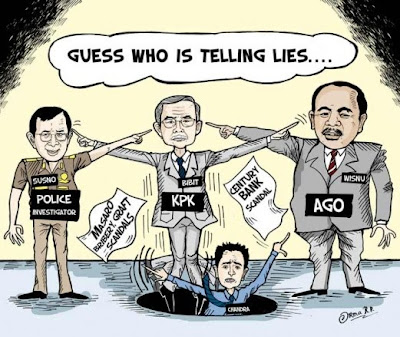 For the past weeks, Indonesian news has revolved around the battle between the Indonesian Corruption Eradication Commission (KPK) and the police. President Soesilo Bambang Yudhoyono (SBY) has made fighting corruption his flagship issue and thus established the KPK some four years ago. The KPK has thusfar brought several corruption cases to light. Then in May this year, the KPK's good name came under threat as its chairman, Antasari Azhar, was accused of ordering the murder of Indonesian business man Nasruddin Zulkarnaen. Not only was this said to be a crime passionel (supposedly, Antasari had an affair with a 22-year-old golf caddie, who happened to be Nasruddin's third wife), it was also speculated that Nasruddin tried to bribe Antasari to stop pursuing him in a corruption case.

Well, this is only the beginning. The story involves many players and intrigues, which are for the large part hard to keep up with. Most importantly, the two deputy chairmen of the KPK, Chandra Hamzah and Bibit Samad Riyanto, were accused of having accepted bribes. A high ranking police officier stated that the KPK and the Police relate to one another like a cicak (gecko) to a buaya (crocodile). It's a useless fight, or so he says.

This analogy spoke to everyone's imagination and is now widely used. The extraordinary thing about it is that the public has risen to the defense of the KPK. Quiz participants on television wear black bands around their arms in solidarity with the KPK, students camp out in front of the KPK building and some were even on hungerstrike (?), NGO's organize press conferences to express their viewpoints and last week Sunday (at 7 am!) famous Indonesian bands (including the extremely popular rockband SLANK) performed at one of several demonstrations - this one attended by about a thousand people.

And there's more: most surprisingly even is the online activity. As Indonesians too are active facebookers (membership rose with 800% over the past months, to 9 million), they have set up groups like 'Gerakan 1.000.000 Facebookers Dukung Chandra Hamzah & Bibit Samad Riyanto' which at time of writing already has over 1.2 million members. 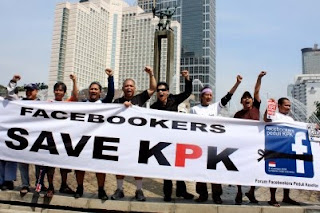 Two weeks ago SBY appointed eight experts (including renowned human rights lawyer Adnan Buyung Nasution) to get to the bottom of things. After two rounds of examinations, the team has recommended that charges against the two suspected KPK leaders be dropped. Also, Susno Duadji quit after wiretapes came out, which shows him invoved in a large conspiracy to bring down the KPK. Well, in Dutch we say that a story has a tail if you expect something not be completely over. In this case, involving geckos and crocodiles, there is no doubt about it: there will be a long, long tail.