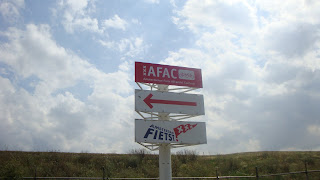 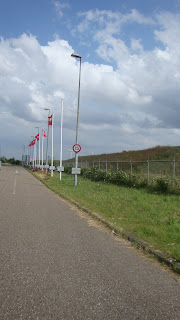 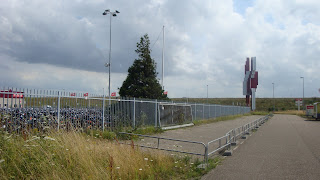 It was the first time in my life as an Amsterdammer. I was flabbergasted. When I arrived at Central Station, it was gone. I looked, and looked. Someone even came to help me ("look for a green lock", I told him). But no, my bike was definitely gone. In all my years as a happy biker I had never parked my bike in such a way that 'they' could take it. 'They' are the milieupolitie or environment police. Well, now I had and they did. I was not supposed to leave by bike designated especially for 'bakfietsen' or carrier cycles: bikes with a big box on it to carry groceries or kids. It's mostly working moms that own bikes like that. And yes, they have parking space especially allocated for them.

As I learned from their great radio commercial [Person A says: "oh no, my bike is gone!". Person B replies:"Ah, fuck!". Person A: "Well, there's no need to curse". Person B: "No, I'm not cursing: AFAC, that's where you can pick up your bike".], I had to contact the Amsterdamse Fiets Afhandel Centrale - the Amsterdam Bike Handling Center (sounds very Harry Potterish indeed). Located in an industrial area far from the city centre, I took me a while to get there. 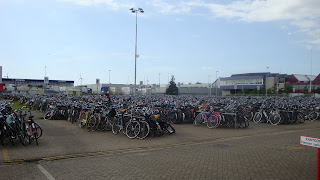 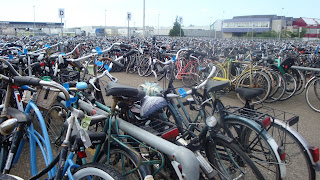 And then I saw it: Hundreds of bikes. Some of them shiny and new. Others dilapidated and long abandoned. It was a magical sight. I walked to the counter, where I was asked to describe my wheels. My description blue (or gray) with a green lock barely sufficed. I was told to follow someone who would point me in the right direction. A guy in an orange overall greeted me friendly and explained that 'this' was a social project. People that 'have difficulties managing in society' work there: they study the bikes and register all their features in a database.
It didn't take long before I saw my remarkably green lock. We were united! I paid ten euro and was given back my bike. A long bike ride home followed. We flew through the sky, mon velo et moi. I was happy with the thought that some people found new meaning in their lives by dealing with all these bikes. And happy to be together again fighting traffic and tourist on the streets of my beautiful hometown.
Posted by Amis Boersma at 2:44 PM

Such pity that you did not photograph the "bakfietsen only" sign. Oh and that Ah, fuck place is totally SF!