“Ah, we just want to keep it confidential. I’m working very hard on it” says a well-known Malaysian lawyer over the phone while explaining how he would pull a few strings here and there to fix someone’s carrier. That ‘someone’ is believed to be Ahmad Fairuz Sheikh Abdul Halim, Malaysia’s current Chief Justice. I’m watching the tape of their conversation, which Free Voice partner Malaysiakini posted online on September 20th. As the video painfully shows the severe lack of integrity of Malaysia’s judiciary system, it has caused quite a stir. The video has already been viewed over 30.000 times. After a two-day silence, the Malaysian authorities respond by appointing a commission to assess the authenticity of the tape. On 26 September, during my first visit to Malaysiakini, over two thousand lawyers marched in protest calling for the establishment of a royal commission of inquiry. In the morning paper, which hung on my hotel room doorknob, there was no mention of Malaysiakini’s part in this whatsoever.

Nevertheless, this is a great example of how Malaysiakini is able to create a stir. For me personally, it was truly impressive to be around and observe how they operate. In July 2005 this scarce source of independent news in Malaysia started broadcasting video’s to supplement the articles posted in the online newspaper. Since then, video has evolved into an essential part of Malaysiakini’s work. Nowadays, the documentaries are not only posted on the (newly set up) Malaysiakini.tv website, but also on YouTube. 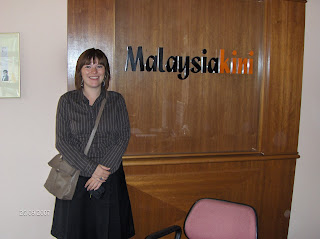 During the ‘grand tour’ of the Malaysiakini office, we got a chance to see the new edit room. In a ten square meter space six editors were working on their video material. The video’s they make mostly provide background information or illustrations to articles posted on the Malaysiakini website. The ten to fifteen minute features show unknown stories and taboos. They deal with topics such as police violence, the position of ethnic minorities or forced labor, which is still practiced in Malaysia today. The short documentary ‘She’s My Son’ about the life of a transsexual aid worker was awarded at the Freedom Film Fest 2007. Despite insecurity as to whether the government will continue to allow Malaysiakini to do what they do, the staff is determined to dig down to the bottom of things. Let there be no doubt about it; with Malaysiakini around no secret is safe!